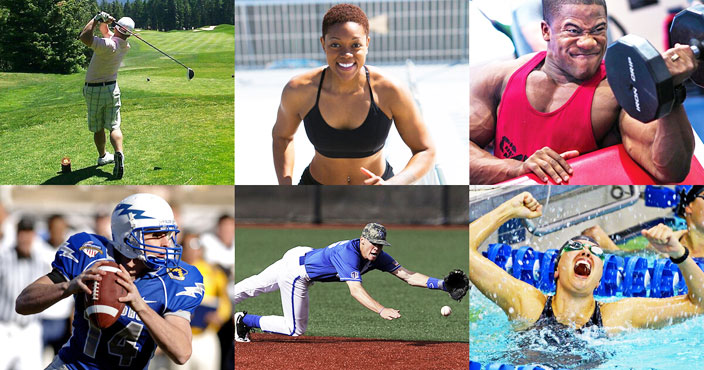 Athletes want to win! Winning requires optimum performance. The ability to perform at the highest level is dependant on the proper function of the nervous system. Therefore, the athlete's nervous system must be functioning at its peak level to be competitive in any sport or activity.

Chiropractic helps both professional and amateur athletes perform at their best. Chiropractic is the only profession that deals with the detection and correction of subluxations. Subluxations are when spinal vertebrae are malpositioned and create interference to the function of the nervous system.

Subluxations not only create nerve interference that can alter the signals coming from the brain heading to the muscles, they can also alter the signals that return to the brain to report how the muscles are functioning. Chiropractic care focuses on the correction of subluxations, thus removing the interference to the nervous system and allowing the athlete to perform at their highest possible potential.

How an Athlete Performs

Athletic performance depends upon the ability to properly coordinate movement, endurance, and strength. These functions are all controlled by the nervous system. The brain generates the intent and sends the signals to the individual muscles to perform the activity intended.

It is essential that the signals generated in the brain are transmitted clearly and cleanly to the intended muscles. Only then can those muscles perform the complex and exact movements necessary for athletic performance. Any interference with nerve signals will decrease the athlete's ability to perform at the highest competitive level.

Participation in any sport requires proper function of the muscles and the nerves that control them. A nerve system free from subluxations will allow for optimal performance in any sport, both on the highest professional level, and for the weekend enthusiast.

Many professional sports teams, including every team in the National Football League, have chiropractors on staff to ensure that their players can perform at their maximum level. Studies have shown that chiropractic care can result in a 14.8% increase in reaction time. For a player, this can be the difference between making the team, or making the hall of fame.

Athletes depend on the highest levels of performance. Many will report having achieved personal bests in their respective sports after starting chiropractic.

Both professional and amateur athletes test the limits of their bodies while performing their sports. A body that is functioning at less than 100%, due to subluxations, will be more prone to injury. This is another reason why many athletes are under regular maintenance chiropractic care. Avoiding injuries is the best way to stay in the game.

In sports, injuries are sometimes unavoidable. Chiropractic helps athletes recover quickly and completely by making sure the nervous system is is free of interference therefore maximizing the body's healing abilities. If subluxations are present, the resulting nerve interference will cause the healing process to take longer, or not heal correctly.

Regardless of whatever other treatments an athlete may seek for their injury, chiropractic should be included as part of the recovery regime.

Wellness and Quality of Life

Even if you are not a professional level athlete, your quality of life and enjoyment of activities depends on a properly functioning nervous system. This is why millions of people see a chiropractor on a regular basis.

Good health is important to everyone. Being physically fit is only one part of being truly healthy. Proper diet, proper physical activity, a good mental attitude, proper rest, and a properly functioning nervous system free of interference from subluxation are all essential for being totally healthy.

Select either gender icon to search using an anatomical model.

Child Saved from Possible Adenoids and Tonsil Surgery with Chiropractic

In the August 8, 2019, issue of the Journal of Pediatric, Maternal & Family Health, is a case study documenting the resolution of a case of swollen tonsils that was recommended for surgery but became unnecessary after chiropractic care was started. . . .
Read More

The Journal of Pediatric, Maternal & Family Health published a case study on May 30, 2019, documenting the resolution of Brachial Plexus Palsy in an infant who had the condition from birth. The authors of the study report that neonatal brachial plexus palsy (NBPP) affects between 0.4 and 2.6 percent . . .
Read More

Difficulty in Swallowing and Neck Pain Helped with Chiropractic

A case study published on December 29, 2019, in the journal Clinical Medicine Insights: Case Reports, documented the care of a woman suffering with neck pain and difficulty swallowing who was helped by chiropractic. This case study was conducted at the New York Chiropractic & Physiotherapy Centre, New York . . .
Read More

The Annals of Vertebral Subluxation Research published the results of a case series on April 17, 2020, documenting the reduction of anxiety in five adults in a case series undergoing chiropractic care. Anxiety disorder is considered a form of mental illness that affects an estimated 31.1% of adults in the United . . .
Read More